On January 7th, 2009 I received an email from a fellow member of my institute’s Middle Eastern Studies Students’ Association, addressed to a handful, asking if any of us would be interested in watching the film Waltz with Bashir that upcoming Sunday. Gaza was, at the time, being crushingly dismantled through missiles and chemicals in Israel’s Operation Castlead. While a part of me wanted nothing to do with anything more related to the conflict, I figured it would work as a good opportunity for discussion and insight. I knew very little about the film itself except that it was an IDF soldier’s personal journey through his mind and past in dealing with what he had seen and done in the Sabra and Shatila camps of Lebanon in 1982.

It was hard to pay attention at times during the film; it was not what I had necessarily expected. There, in front of me, stood images of IDF soldiers in the bodies of young boys either insecure with their duties or over zealous with newly acquired weaponry. I didn’t want to see this; I did not come to feel sympathy for a uniform. But I stayed: war interests me as does the situation of those involved on either sides and at any level. I was a student of politics and history and here I was watching a revisionist account of both a personal exploration and a brutal civil war, from the perspective of an occupier.

The conclusion of the film, however, was not as I expected it would be. Drawn images of wailing women entering the Sabra and Shatila camps quickly switched into the real footage of those entrances, those discoveries of dead loved ones. There was no music; just the sounds emanating from the throats of shattered women.

Unable to keep in whatever it was that was trying to get out, I could not stop myself. Their tears, despite being decades old, felt as fresh those streaming out of my own eyes. I felt anger and pain. I felt hatred and I felt so completely helpless.

Friends around me quickly lent arms and whispers to comfort me, but none could. Deborah, a beloved friend who is Jewish and progressive, was, however, able to help me make some sense of where the tears had suddenly come from.

‘Despite not being there, despite not even being Palestinian, let alone Arab, you can still see yourself in their position can’t you? You feel a kinship. And these past couple of weeks have been hard; you’ve been keeping it in. You have to let it out.’

Her words stung in their precision. And so I cried for the Palestinians, for those in Gaza, but most of all I cried for myself. I needed a selfish moment because I was ill equipped to deal with what I was learning, experiencing and feeling. I didn’t know what to do and so I cried to lift the weight off 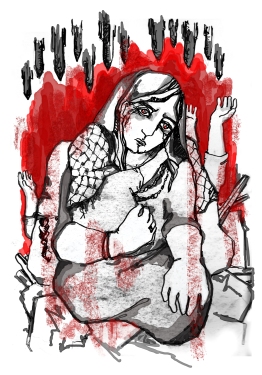 my heavy heart. In a way I had no real right to cry – I am not Palestinian and I have no connection to Gaza other than human. I  have never experienced any violence. I have never held any fear for my life. And I have never had to worry about food, water, shelter and other basic securities of life. My privileged position did not give me any right or reason to cry for myself, but I did. The burdens of the heart were several and I tried hard to peel them off, one by one. There were frustrations with, of course, the actual actions on the ground in Gaza by the Israelis. There was anger at the complicity of major international actors, through their inaction and silence, in ending the offensive. There was anger at the media and there was confusion and hurt towards the increasingly ‘militarized’ feeling of my university’s campus as slowly it came to feel as though it was the second front to Operation Castlead. There was anger at history repeating itself.

There was too much anger and I didn’t know how to make sense of it all. I felt no sympathy for the Israelis who claimed suffering and fear–this frightened me. Despite my very committed views on the situation, justice is justice and injustice is injustice. Was I really weighing some human lives as more worthy than others? I fought against this, trying to put people before borders and violent words. But it was hard.

And then Israel struck Gaza again just two days ago, in what is beginning to look like an offensive far worse than Castlead. Aided by social media and bloated egos, the ugliness of the offensive and its propaganda is easily accessible – either by choice or unfortunate clicks. The very public nature of the offensive, overtaking tweets and tumbles, has led to an equally public reaction. There is a lot of anger, a lot of frustration. There is much hatred too. And four years after I first felt those emotions, I find myself trying hard once again to not fall into the trap of polarities. There is no equality in the violence  – Hamas homemade rockets cannot be measured against, in any sense, Israeli arsenal. The human, economic and social toll is vastly different between Israel and the OPT. The power relations speak for themselves: there is an occupier and there is the occupied. Palestinians in Gaza struggle for fuel, while Israel holds an arsenal of what may be almost 200 nuclear warheads. Israel demands recognition of its right to exist as a state but denies reciprocity. Palestinian villages have been cleansed, graveyards bulldozed and an entire culture erased as well as stolen. There is an apartheid and Israeli democracy depends on ethno-nationalist sentiments – not democratic. These are more black and white than perhaps we’d be led to believe. And yet ..there are still human bodies involved.

When I see tweets about how lucky Israelis are to have bomb shelters or how someone feels a sense of ‘delight’ in seeing images of Israelis fleeing to their bomb shelter as a moment poetic justice for the 65 years of occupation and violence suffered by Palestinians, I cannot help but wince. We can disagree on the source of fear; we can see the source of a particular fear as completely illegitimate and created. That does not, however, change the experience of fear as a real experience, feeling and perception. We are, yes, all in pain – to varying degrees – and we react to our pains and the pains of others in different ways. Yet these differences in pain and fear should not give us any reason to belittle the pain and fear of others, including those we see as our enemies.

My moral hesitation is not out of some belief in the equal weight of experience, fear and perception but rather in the belief that justice should never exist at the prerogative of another – whatever and whoever that ‘another’ is. No one deserves injustice. Not even an enemy.

4 thoughts on “Lamenting Gaza: Fear, Justice and the Enemy”