I suddenly remembered the light signal. He undoubtedly expects the patrol to be close by. At this thought I regretted having thrown the machine gun away. But what good will it do since I don’t know how to use it? It may in fact be better not to use it because its noise will sound like thunder in this complete silence of the desert. Now, however, I have a hostage I do not know where to take or how to take advantage of it. It might have been better had I slain him immediately during our brief struggle. But now this seems impossible and beyond my capacity and 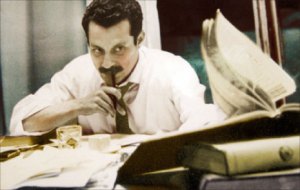 of no value whatsoever. I was feeling him and following his breathing beside me. He seemed tired, lost and perplexed but alert and anticipating a surprise to from between his legs. Suddenly, the hours of the night seemed to me like a terrifying, slow and incredible dream. A bottomless loss and fall replete with wile nightmares. And here I am again faced with a new situation I do not know how to handle.

I started to smile and then suddenly burst out laughing.

The fida’i in this story has captured an Israeli soldier, but is unable to kill him. He comes to realization that the Israeli is no longer an abstraction. That the Israeli is a live, breathing human being. And he reflects on the tragic situation which has fallen upon both of them. The “brief struggle” prior to 1948 versus the new reality of a new people living in and breathing the land that was once entirely his. The situation is not as clear and simple as he had envisioned it prior to having this man at his mercy.